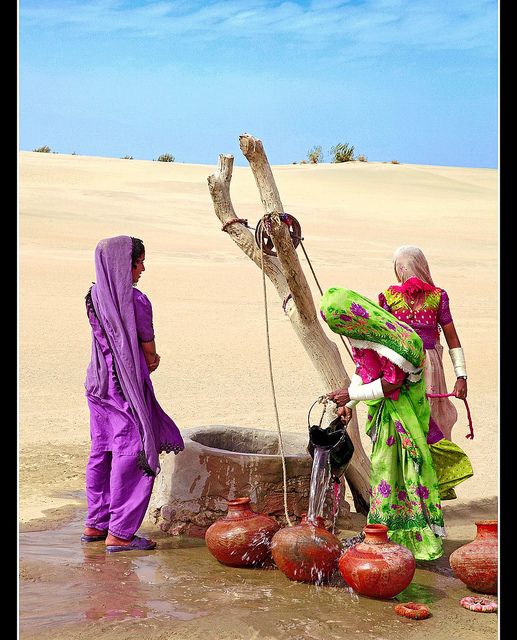 We were on the seventh day of the crossing. The caravan made a small detour in its course to supply itself with water from a well built and kept by a small community of Tuaregs; even though Tuaregs are nomadic, they had established themselves on that site for quite some time. They were friendly people who lived off supplying the needs of caravans. In addition to drinking water they extracted from an underground source, they provided victuals and traded camels. The Tuareg women were known for the colorful textiles of their clothes and the delicious date sweet they baked to sell. After filling up my canteen, I tasted that famous delicacy and understood why it was called “the honey of the desert”. I ate it with my eyes closed, so good was the taste. Because I didn’t know when again I would have another chance to eat it, I bought a huge quantity, enough for many days, and put it in the saddlebag of my camel. It didn’t take long for the caravan to resume its journey. On that day, I kept devouring the sweets, one after the other, obsessively and voluptuously. The more I was eating, the thirstier I was feeling, and had to drink more water than I normally did. By early evening, when the caravan set up camp for the night, I was feeling queasy and my canteen was empty. Bloated, I did not feel like eating dinner and moved away, feeling sick. I went to the crew member in charge of provisions and asked him to fill my canteen. He politely refused. He said he had been instructed by the caravanner to supply water only from the second day after stopping at the well, so that everyone felt committed to collaborate with the rational use of water, because of the harsh conditions the environment imposed. I insisted, but the man remained adamant. I moved away and, shortly, my thirst increased exponentially until it became unbearable. Irritation took over me like an effect of the withdrawal syndrome. From afar I saw another traveler, a trader with the experience of many crossings, drinking water. I approached him and asked for a little. I told him what had happened. He looked at me for a few seconds and told me he would sell a canteen. I saw he had many in his saddlebag. Without blinking, I said I would pay. He smiled, but what an odd smile. Then, he said the price. It was high. Very high.

I argued it was an absurd to charge such a price for a small amount of water. The trader replied that it was cheap, because that price was not for the water, but for my life.

Everyone knows it is impossible to survive without water. In inhospitable areas, such as the desert, life is even more fragile, and water is more necessary. I said that his was an inhuman, abusive behavior. He shrugged and said I was free to decide. I argued that my need did not leave me room for a choice. I reasoned I did not have all the money he was asking. The trader suggested I give my camel in payment. He said he could use the animal to better distribute the weight of the merchandise he was transporting to the oasis. I rebuked by pointing how ludicrous his proposition was, because I would have to continue the journey on foot. I pleaded for his mercy; the man advised me to plead with the caravanner for mercy, because he had water enough for everyone. Once again, I begged the trader, in vain.

Feeling tempted to trade my camel, I decided to move away, trying to organize the mixed ideas and emotions that were taking over me. I had lost peace; without peace, happiness was but an illusion. Flimsy had become the love I felt for me or for anyone. I felt like the worst man of all, a deadbeat. I realized I might have to accept conditions with which I did not agree; without freedom, I would also lose dignity. I cursed life.

I tried to calm myself and thought I might have a chance to negotiate. The people of the desert had trade as an art. I went back to the trader and offered a very expensive watch I was wearing. He refused. I increased the bid by adding part of the money I had. He did not yield. Even my offer to give him all the money I had was not enough. I proposed I would make a bank transfer in the amount equivalent of two camels upon my return to my hometown. Then, ten camels. He remained adamant in his negative. The trader was insensitive to my offers, arguing that he did not need “a watch now or money later”. At that moment, he needed my camel just as I needed a canteen filled with water.

Thirst was assailing me unbearably. When I thought about resisting to the trade he proposed, the dryness of my throat seemed to suffocate me. The air I was breathing burned like fire. I gave up. Resigned, I told the trader I accepted his absurd offer. He couldn’t care less about what I thought. He grabbed a canteen in the saddlebag and, before handing it over to me, warned that as soon as I took it, the deal was closed. Irrevocably.

Grudgingly, I nodded in agreement with the conditions. As I held out my hand to grab the canteen, another one, more rustic, made of goat skin and filled with water was thrown at my feet. It was the caravanner, who had approached without being noticed, who did it. Thirsty, I picked it up and took a long gulp that gave me an unforgettable feeling of pleasure. The pleasure was for both, having my thirst quenched and being rescued from the conundrum I had been embroiled in. Facing up to the caravanner, the trader protested, claiming the tradition of the desert prevented a man from interfering in the business of another. The caravanner, keeping his composure, answered in a tone that balanced serenity and firmness: “It is also a tradition of the desert that a man cannot make another a slave. I understand, according to values, that the later supersedes the former.” He turned to me and commanded: “Move away and learn to take care of yourself. Be a master of your choices so that you are not prisoner of your desires.” Before the trader could utter a word, he turned around and left. Without waiting, I also moved to a corner far away from there.

Alone, away from all people, I laid on the smooth sand, the facts of that day revolving in my mind while the desert’s starry sky enthralled my eyes. I slept right there, embracing the goat skin canteen, now half full, a true treasure for the following day. In the middle of the night, I woke up as I had been frightened by a troubled dream. Next to me the beautiful woman with lapis-lazuli eyes was seated, her legs crossed as if for meditation. She looked at me as if she had been watching me while I was sleeping. I said it had been a difficult day, but I had learned a valuable lesson. I said that from that day on, I would be more moderate about my pleasures and my needs. I added that perhaps I did not need as much as I thought I did. I had to review my nonnecessities. The woman smiled and said: “Temperance is the flower of serenity, whose roots are in sensitivity. The lower the dependence of whatever kind, the higher one’s composure. The more you are moderate regarding your needs, the freer you will be. Freedom preserves dignity, dignity envelopes us in peace, and peace allows us to breathe the pure air of happiness. Then, we can truly love, devoid of the mundane requirements we impose on ourselves.”

“Temperance is the art of balancing the two halves of a whole being. It is capable of exposing some shadows, such as voluptuousness, envy, jealousy and greed, for instance. By revealing the insensitivity of many to the desires of ego, and the importance of appreciating the basic needs of the soul, temperance guides us towards plenitude. It takes away the heavy weight of having to offer lightness to the being.” She paused and then completed: “It is not a matter of enjoying life less, but to revel in all that this existence provides.”

I turned my eyes to the stars and thought about how less can become more in face of the immaterial fortune of plenitude. Freedom, dignity, peace, happiness and love are sacred flowers hidden in a worldly garden; finding them is the enchantment of life and the unmeasurable power of the soul. If humility is the virtue that opens the portal to the Path, temperance balances me through it.

I do not recall falling asleep again, but I woke up with the early rays of the sun caressing my face. I was still grabbing the goatskin canteen. The caravan was preparing to break camp, and soon it would resume its journey. As I expected, there was no sign of the lapis-lazuli eye woman. I asked myself if the conversation of that night indeed occurred or if it had been just a pleasant dream.