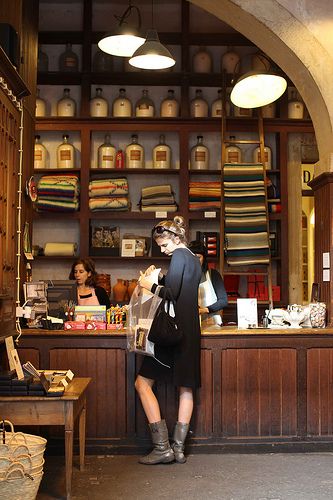 It was a spring Sunday. The Old Man, as we affectionately called the oldest monk of the Order, and I had gone to the small and charming village located at the foot of the mountain that houses the monastery, to attend mass. At times the Old Man was asked by the local priest, a good friend of his, to address the parishioners on any subject he thought important. I asked him what he would be talking about that morning, and he told me he did not know yet. Because we had arrived early, we were waiting seated on a large wooden bench at the square in front of the church, enjoying the warming sun while children, taken by their parents, ran excitedly around, causing quite a hubbub. Because the bench was so large, two men asked permission to share it with us. As they sat, they started to talk to each other. I realized the Old Man was, discretely, paying attention to their conversation, and I looked at him with a stern gaze of reproach. He smiled roguishly but continued to pay heed to the men. That had an infectious effect on me, and I too started to pay attention to the conversation. One was telling the other that business was not good. In fact, they were much worse than they had been in the past. In a serious tone, he said he had bet on the lottery, whose prize had accumulated due to successive rollovers and amounted many millions. If he won, he swore he would adopt a child. He said that his children were grown and settled in life, and perhaps it was about time for him to take this step. However, he would do it only if he was financially secure. The friend agreed and mentioned the high costs of rearing a child. The friend said he had also placed a bet on the lottery. Were he to win, he would not reach the point of adoption, but swore to make a huge donation to a philanthropic organization. Soon the bells started to call to mass, and most people at the square went to church.

Mass went on as expected; perhaps that would have been just another ordinary day to be erased from memory, were it not for the words of the monk when, after being invited by the priest, reached the pulpit to make his address. With his usual composure, he spoke to the audience as someone who is talking to a friend: “We have a very rude way to deal with God. In fact, we behave poorly when we talk to Him.” In face of the astonished looks of everyone, including mine, he continued: “Most of the time, we treat Him as if He were a merchant, an important trader, but no more than that, and the Universe is but a trade counter. ‘If I get that job, I promise I will quit smoking; if I get a promotion, I will stop drinking; if I am healed from the disease that has affected me, I promise to make a donation to church, or go to mass, or visit my mother every Sunday; if I find a suitable spouse I will give children bags of candy on Halloween.’” He made a brief pause and a joke: “Or should the donation be to Saint Anthony?” There was laughter when he mentioned the patron saint of marriages. “Perhaps this is a bad habit we have developed since childhood.” He paused once again, and then asked the audience: “Who never promised anything to God in exchange for an A in Math?” More laughter.

“If I make an extra buck, I will donate part of it to charity. We bargain a lot to give up a little, isn’t it so?” People became serious again. He continued: “We ask for a lot, to share a little, and always wait for an expected better time to share the honey of life.”

“Why do we need to have a profit before splitting the content of our luggage? No one is so poor that they cannot exercise love in form of charity: a sincere hug may be much more valuable than a wad of money. So, why don’t we revert the equation and become more virtuous in everyday life? Hence, we may well have a more interesting life?” He stopped speaking for a moment, so that his words found their place in the ears of the audience. Then, he continued with his reasoning: “Regardless of being a Christian, a Jew, a Muslim, a Buddhist, a Hindu, a Spiritist, a Shaman, an Esotericist, or following any other religious, philosophical or metaphysical tradition, or even being simply and sincerely an atheist, the power that drives, rules over and educates us is the same. It does not matter how one imagines the teacher, the lessons of wisdom and love are perfect for everyone.”

“Irrespective of the way you conceive the hands that thread the web of life, you were given the proper conditions for your improvement and evolution in this existence. To each worker the precise tool to construct their work according to the capabilities they already have and the skills they must develop. Out of fairness and affinity, you will get involved with the situations, easy or hard, of shadows and of light, that you must face to reach the level of understanding that comes next. It is like a university course, to diligent students the tests seem easier, even though they are the same for the whole class.”

“Some will say that I am not telling the truth, because clearly life is easier for some than for others. To respond to their point, I can think of two answers, both equally true: the school year has started some time ago; some students had advanced while others must attend remedial classes. To lazy students the lessons are harsher, not out of punishment but out of love, because the good teacher works for the entire class to evolve, without giving up on any of the students. Likewise, do not be deceived by appearances. If, for some students, the lessons seem easy to understand in the classroom, sometimes we don’t know how hard their homework was. Notwithstanding, at the end of the course, each student in their own time, they will all graduate.”

“The universe is a fair, loving, incorruptible master. Therefore, do not try to bargain with it. Forget the idea of handing the teacher an apple for a better grade you do not deserve on the geography test.”

“Of course, life wants you to become a better person, that you be more generous with the planet, with others and with yourself.” He paused for a moment and then continued with his explanation: “Yes, we must learn how to be more affectionate to ourselves. Often, in our search for happiness, we are deceived by the evanescent shine and false ease that are so appealing, rather than choosing out of the truth and love that exist in the core of each action. Then, we feel abused and suffer. Favoring the self over the soul makes us feel abandoned in the middle of a crowd. One must pay attention to what keeps, propels or illuminates them, or else they will continue to cause harm to themselves.”

“Disoriented, we decide to bargain with the teacher. We forget that life is not a million-dollar business market, even if it seems so; it is, rather, a school that educates excellent masters.”

He looked steadily to the audience and asked a question whose answer he voiced without wait: “Is the path difficult? Change your stride. Learn, become someone different and give your best to the world. Stop making demands and start acting. Realize how things around you will change.” He paused once again and completed: “But don’t even think about cheating. Change must be out of deep love, never shallow interest.”

When the Old Man came down from the pulpit, I noticed that people were vexed, and I thought he had been stern in his words. The priest, however, was smiling and took over the mass ritual. When it was over, he came to us to thank the monk for the preaching; they hugged each other with sincere affection and we left. Out of the church, on our way to a café close by, we were approached by the two men who had shared the bench with us before earlier. In a rude way, they asked if the sermon had targeted them, because they remember having sat next to the monk. The Old Man was kind: “I apologize for being thoughtless and having listened to the conversation. However, consider that it was unavoidable because we were so close, and yes, your conversation inspired me. However, I did not target you with my address, but everyone, including myself. Life is not a shop open for business, but a sophisticated school of evolution.”

The men said that the monk was not the sole possessor of truth nor did he know about the hardships and pains of each one. They left angry. Without losing composure, the monk held me by the arm and continued to walk towards a fresh cup of coffee. I wanted to know if he had been upset with the accusation made against him. The Old Man arched his lips in a sweet smile and said: “Absolutely not, especially because I agree with them, I do not have a monopoly over the truth. However, I have the right to share my view of life the way I believe is true. No one must agree or follow me on that. Regardless of how each one sees God, the Universe or Existence, I do not believe in bargains for the flourishing of virtues, or trading peace for the plentitude of the soul.” He paused and, much to my surprise, continued: “Just one offering is accepted.” He furrowed his brow and disclosed it: “The one that makes a person better at each day, with the improvement of the spirit and the liberation of the self: the transformation into the bread that nourishes humankind in their hunger for light.” He winked an eye as if telling a secret and completed: “Nothing else.”